Scientists Found A New Dwarf Planet In Our Solar System 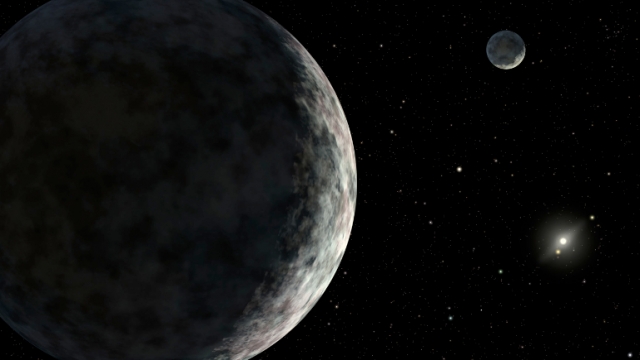 There's a new dwarf planet to welcome to the solar system.

A team of scientists in Michigan found the distant planet while working on mapping distant galaxies.

This discovery joins a growing list of dwarf planets on the outer edges of our solar system.

Pluto is one of the original dwarf planets. It's about 1,500 miles wide and takes 248 years to orbit the sun.

Oblong dwarf planet Haumea has one of the fastest rotations in our solar system, turning on its axis every four hours. It takes 285 years to orbit the sun.

Makemake is smaller than Pluto and a bit farther from the sun, making its orbit equivalent to 310 years.

Even farther away is Eris, and it's actually outside the Kuiper Belt. Eris' orbit takes 557 years.

SEE MORE: A Lot Of Our Space Knowledge Comes From A Bunch Of Antiques

We can thank Eris for Pluto's demotion from a planet to a dwarf planet. When first discovered, scientists thought Eris was larger than Pluto, and that's what prompted the International Astronomical Union to update its definition of a planet. It's that new definition that booted Pluto to the dwarf planet category.

It takes scientists two to three years to make the discovery of a new dwarf planet official. So hopefully we'll have a better name for 2014 UZ224 sometime soon.