Scientists Are Fighting An Invasive, Cannibal Toad With Its Own Poison 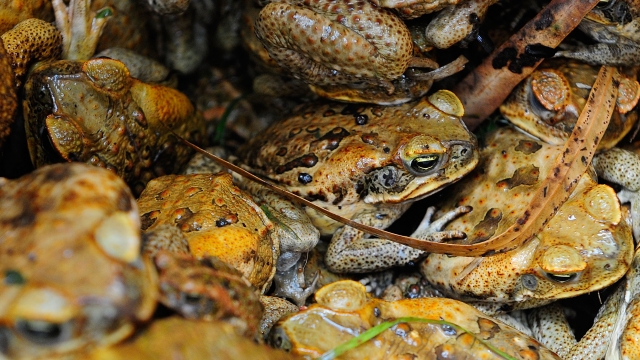 To fight an invasive toad species in Australia, scientists are planning to use the animals' own toxins against them.

About 100 cane toads were first introduced in 1935 to battle pest beetles that were hurting the sugar cane industry. That didn't really work out. The toads ignored the beetles and spread all over Australia in the following decades. It's estimated there are now billions living on the continent.

Cane toads are cannibals, and it's common for tadpoles to eat eggs from other cane toad families. They are attracted to their toxin, which is fatal to other species.

So scientists are extracting the poison from adult cane toads and using it lure tadpoles into plastic boxes that serve as traps.

The traps only bring cane toad tadpoles because other species aren't attracted to the bait. Field tests showed that the traps can capture 50,000 tadpoles in two weeks.

This video includes clips from Dylan O'Donnell / CC BY 3.0, National Geographic and BBC and images from Getty Images and Pavel Kirillov / CC BY SA 2.0. Music provided courtesy of APM Music.