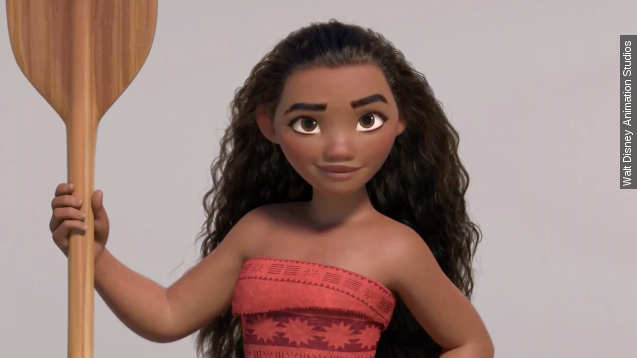 SMS
Say 'Aloha' To New Disney Princess Moana
By Cody LaGrow
By Cody LaGrow
October 7, 2015
Disney's new princess is of Pacific Islander descent and so is the young actress picked to play her.
SHOW TRANSCRIPT

Let's throw a luau. Disney has a new princess and she hails all the way from Hawaii.

Auli'i Cravalho, a 14-year-old Oahu native, sang the pants off of casting directors to beat hundreds of other girls vying for the role of Moana, Disney's first princess of Pacific Islander descent.

"Moana" is based on a teenager from 2,000 years ago who wants to prove she's a master wayfinder. On her journey, she meets a demigod named Maui, who will be played by none other than a singing — yes, singing — Dwayne "The Rock" Johnson.

Johnson said in an Instagram post: "I'm pumped to welcome 14-year-old Auli'i Cravalho of Mililani, Hawaii, to our project. What's amazing about this story is that she didn't think she was good enough, so she never auditioned."

"When I first heard that there was going to be an audition to potentially play the role of Moana, I thought, 'No way that could be me,'" Cravalho explained.

That was until an Oahu casting agent showed her that maybe she can identify with Moana's tenacity.

Cravalho told People magazine, "She's brave, she is so empowered, she knows what she wants and she’s not afraid to get it, and I think that’s something that I can relate to as well."

"We're not pretending, we want you to be the voice of Moana," a casting director said.

"Thank you so much!" Cravalho said.

The casting of a Native Hawaiian has got media watchers saying "mahalo" to Disney. Founding editor of The Nerds of Color, Keith Chow, told NBC News, "Like it or not, the Disney Princess brand is hugely influential and to see a character like Moana — who will be played by an actual Native Hawaiian actress — added to that lineup is a win all the way around."

According to the composer of the film, Cravalho is also half-Puerto Rican and is sure to bring diversity to the Disney Princess brand.

"Moana" will hit the box office just before Thanksgiving next year.