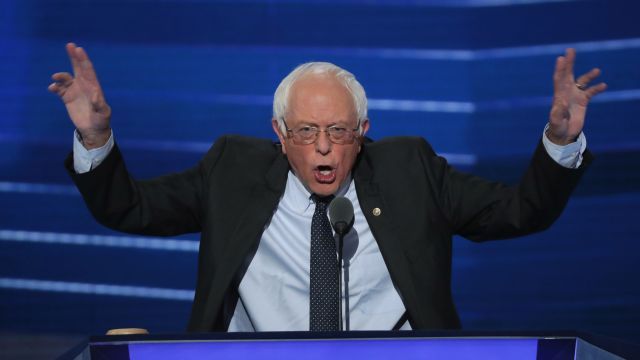 Despite a hard-fought primary, Bernie Sanders is with her now. And some damn emails aren't going to change that.

In an interview with The Washington Post, Sanders dismissed reports of Hillary Clinton's staffers badmouthing him and his campaign during the primary. He also admitted his campaign might have said some unkind things about the Clinton camp, as well.

Sanders told the Post, "Trust me, if they went into our emails — I suppose which may happen, who knows — I'm sure there would be statements that would be less than flattering about, you know, the Clinton staff. ... That's what happens in campaigns."

WikiLeaks has been steadily publishing emails supposedly from Clinton campaign chairman John Podesta's inbox. In one exchange, Podesta labeled Sanders a "doofus." The Clinton campaign hasn't confirmed the authenticity of those emails.

Podesta told CNN, "You say things in private that you regret, but I have great respect and great admiration for Sen. Sanders."

Given Sanders' fiery disagreements with Clinton, it'd be surprising if his staff didn't have a few rude things to say in private about her or her campaign. But the prospect of a Trump presidency has driven Clinton and Sanders together.

"I am going to do everything in my power, and I will work as hard as I can, to make sure Donald Trump does not become president of the United States," Sanders told reporters outside the White House.

That's not to say Sanders has given up on the far-left ideals which powered his campaign. He also told The Washington Post that even if Clinton becomes president, he will continue to push his legislative priorities and oppose presidential appointments that don't meet his standards.