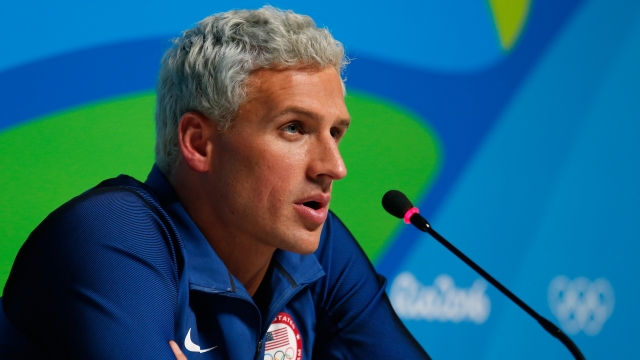 SMS
Ryan Lochte Gets A 10-Month Ban For That Thing He Did In Rio
By Ben Lawson
By Ben Lawson
September 8, 2016
The punishment comes after Lochte and other U.S. swimmers gave a false story about being robbed at gunpoint in Rio de Janeiro.
SHOW TRANSCRIPT

Olympic swimmer Ryan Lochte is officially banned from swimming competitions for the next 10 months and has to forfeit $100,000 in bonuses.

The punishment is over false reports he and three other swimmers gave about being robbed at gunpoint by people posing as police officers while in Rio for the Olympics.

It was later discovered they got into some kind of an altercation with security at a gas station and weren't actually robbed. He's currently being charged in Brazil for filing a false police report.

SEE MORE: Can Ryan Lochte Bounce Back From His Rio Robbery Lie?

The three other swimmers — Gunnar Bentz, Jack Conger and James Feigen — are suspended for four months.

It's not clear why Lochte was suspended longer than his teammates.

Lochte was even suspended four months longer than Michael Phelps was for a second DUI charge.

The suspension means Lochte won't get any bonuses for winning his gold medal or any other compensation from the U.S. Olympic Committee and USA Swimming.

It also means he won't be able to qualify for the 2017 world championships in Budapest.