Countries Race Tanks At These Games In Russia 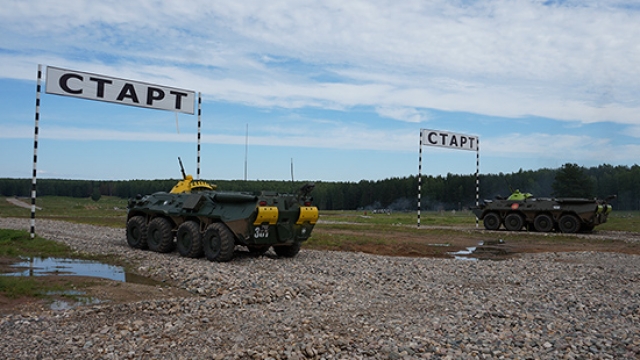 These tanks aren't about to go into combat. They're racing in a competition.

These are the second annual International Army Games hosted by Russia and Kazakhstan, and things just wrapped up. Twenty-two countries are competing, including Iran, Azerbaijan and China.

Among those who didn't join were the U.S. and most NATO countries, but those countries were reportedly invited.

The games come at a time when several major conflicts are going on in and around the countries involved — most notably, Russia's involvement in both Ukraine and Syria.

Relations between Russia and Ukraine have become increasingly tense recently. Russia's prime minister said the country could cut diplomatic ties with Ukraine. The countries' ties have been especially strained since Russia annexed Crimea in 2014.

In Syria, Russia has backed President Bashar al-Assad's regime against rebel forces and has contributed military power and airstrikes.

But outsiders believe the motivation to hold the games — despite these conflicts — is to reinforce national pride in the Russian military.

So it's no surprise Russia keeps sweeping the competitions.

The media seem content to cover the fanfare around the events while taking the go-to angle of "Olympics with tanks" and "the competition other than Rio."