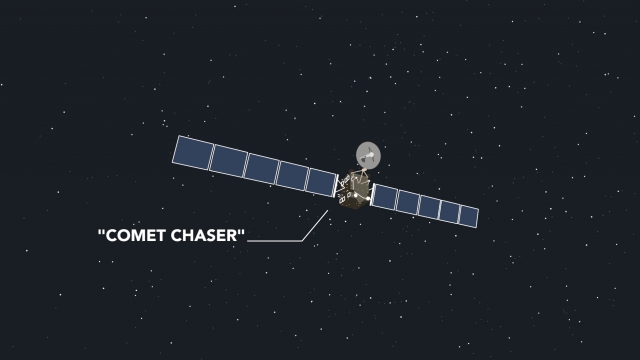 SMS
Rosetta Orbiter Will End Its Space Journey By Smashing Into A Comet
By Lindsey Pulse
By Lindsey Pulse
September 12, 2016
The Rosetta space orbiter was launched more than a decade ago.
SHOW TRANSCRIPT

Say goodbye to the Rosetta space orbiter because, well, it's about to bite the dust.

The European Space Agency launched the flying object into space more than a decade ago. Rosetta is known by the agency as the "comet chaser," and it will crash into its destination on Comet 67P near the end of this month.

The orbiter has had many historic firsts for a spacecraft. Researchers don't know a whole lot about comets, and Rosetta is the first spacecraft to fly alongside one.

The craft has seen how a comet is changed by the heat of the sun, was the first to take pictures of a comet to see what it's made of and will be the first to touch down on a comet's nucleus.

And the landing comes at a good time. Rosetta will be joining its counterpart Philae on the comet — Philae touched down in 2014, then it disappeared.

Earlier this month, the lander seemingly came back to life and sent a picture of the comet to Rosetta.

Starting on Sept. 24, the orbiter will reportedly begin its descent into the depths of a comet core, where it probably won't be heard from again.