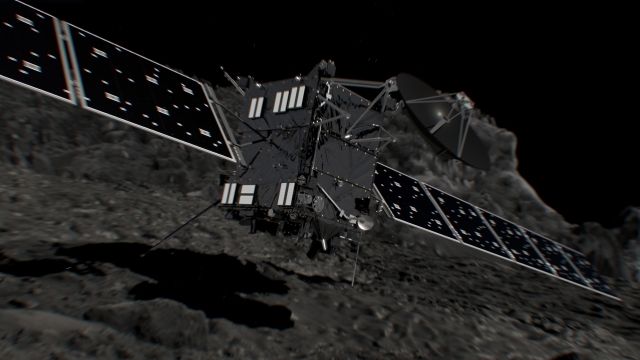 SMS
A Gentle Ending To Rosetta's 12-Year Mission
By Evan Thomas
By Evan Thomas
September 30, 2016
The European Space Agency's comet orbiter has run its course and dropped to the surface of comet 67P.
SHOW TRANSCRIPT

Rosetta has ended its mission around comet 67P with a gentle thump.

Mission engineers at the European Space Agency sent the probe to a careful crash-landing on the comet's surface. In the control room on Friday, its communications signal flatlined.

ESA project scientist Matt Taylor told NPR, "There's mixed emotions here. You know, people have invested their lives and their mentality, I think, as well — their psychology — on this mission."

All through the mission, ESA staff gave Rosetta personality on Twitter you don't often see from hardware. Even the most jaded of space rovers was sad to see a fellow explorer go.

But the end to Rosetta's mission operations doesn't mean an end to science from comet 67P. Researchers will be analyzing the data Rosetta and its lander Philae collected for years.