Forget The Gold; Olympic Divers Want To Know Why Their Pool Is Green 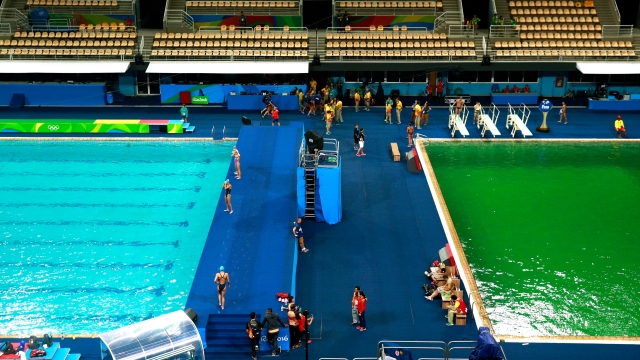 SMS
Forget The Gold; Olympic Divers Want To Know Why Their Pool Is Green
By Grant Suneson
By Grant Suneson
August 9, 2016
Divers and spectators noticed the water in the diving pool at the Olympics turned from blue to green. The leading theory is an algae bloom caused it.
SHOW TRANSCRIPT

Before the Olympics, fans were worried about the state of the waters surrounding Rio. Now, the Olympics are here and everyone is wondering what happened to the water in the diving pool.

Diving fans were dismayed to see that the water's blue hues from the first few days of competition were gone, replaced by a green, murky pool.

British synchronized diver Tonia Couch said the water made it impossible for her to see her partner.

The leading theory about the color change is that an algae bloom started because the pool didn't have enough chlorine.

Sports Illustrated noted that algae typically blooms in warmer water, which could explain why the warmer waters under the diving platforms turned green, while the cooler swimming pool is still blue.

A spokesman for the games said officials are investigating the cause and added that they did test to make sure the water was safe for competitors.