Right Now, The GOP Has A Florida Problem 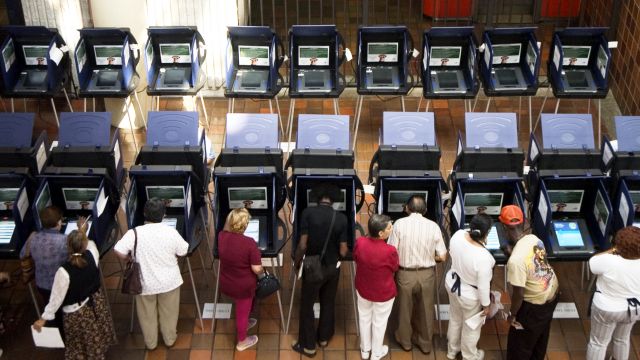 SMS
Right Now, The GOP Has A Florida Problem
By Katie Link
By Katie Link
May 3, 2016
The Sunshine State has 29 Electoral College votes up for grabs, making it the most populous swing state in the country.
SHOW TRANSCRIPT

There’s a good chance all eyes will be on Florida come November. The Sunshine State has 29 Electoral College votes up for grabs, making it the most populous swing state in the country.

And if voting were to commence immediately, that swing state would go to the Democrats.

If Florida does tip in Clinton’s favor, the race may be over altogether. The Washington Post points out that if Clinton clinches Florida and the 19 states, plus the District of Columbia, which voted Democrat from 1992-2012, she’d have the total number of electoral votes needed.

The path to securing 270 electoral votes is a little harder to predict for a Republican candidate. In the past six elections, 13 states have consistently voted Republican — securing those states would still leave the GOP nominee behind by 168 electoral votes.

But there's still plenty of campaigning time ahead of us, so these opinion polls could change.