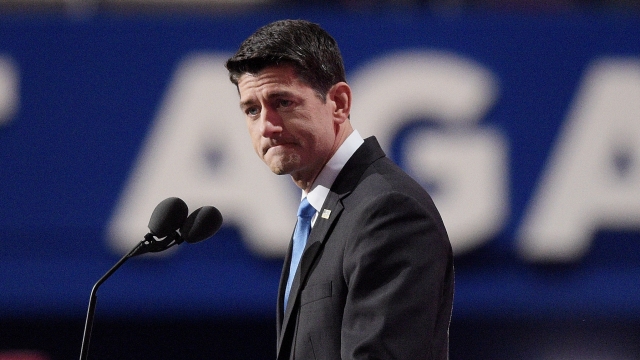 SMS
Paul Ryan Is Worried Trump Could Derail Plans To Keep House Majority
By Eugene Daniels
By Eugene Daniels
August 6, 2016
Ryan reportedly told donors the majority could be in jeopardy because of Donald Trump.
SHOW TRANSCRIPT

Right now, Speaker of the House Paul Ryan can count on a pretty solid Republican majority to keep him in his seat — but the speaker is starting to caution supporters Donald Trump's nomination might change that.

According to a report in The New York Times, Ryan warned a conference of GOP donors that "even the party's substantial majority in that chamber might be in jeopardy." Since he was talking to donors, Ryan's comments could probably be more about funneling donor money to tight House races than expressing genuine electoral angst.

SEE MORE: Corporations Brought Lobbyists And Lawmakers Together At Conventions

But even voicing the possibility is a big deal. Losing the Senate is one thing: Democrats only need to win five seats to take the majority. But to win the house, Dems need to gain 30 seats.

And the fact that Ryan is publicly sweating that flip is just a stark reminder of how Trump's candidacy is freaking out donors and the GOP elite. And after a terrible week for Trump, that freakout is moving to full-on panic.

Ryan has been trying to show a unified, on-message GOP; his endorsement of Trump was based around those same ideas, trusting a President Trump will sign off on a conservative agenda. But that endorsement even seems to be up in the air now.

SEE MORE: Donald Trump And Paul Ryan Now Have An Endorsement In Common

He told a radio station just last week he is not above pulling his endorsement of his party's nominee, which would be pretty unprecedented if it actually ever came to that.

This video includes clips from Speaker of the House Paul Ryan, C-SPAN, the Republican National Committee and CNN.