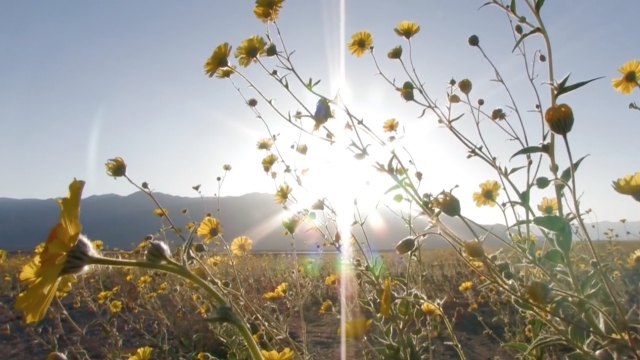 SMS
Rare 'Super Bloom' Could Happen In One Of The Hottest Places On Earth
By Samantha Crook
By Samantha Crook
February 18, 2016
Death Valley might have an explosion of blooming flowers. This natural phenomenon happens about once every 10 years.
SHOW TRANSCRIPT

A rare flower-bloom could happen in one of the hottest places on Earth.

If the valley gets a little more rain, it could create a "super bloom." They happen about once a decade.

It's not uncommon to see some flowers there. But a super bloom is different.

Park ranger Alan Van Valkenburg says you should see one at least once.

"There are so many seeds out there just waiting to sprout. Just waiting to grow. I had no idea that there was that much out there. When you get the perfect conditions, the perfect storm, so to speak, those seeds could all sprout at once," Valkenburg said in a U.S. National Park Service video.

The National Park Service said in January that it spotted "fields of flowers on the black volcanic rocks."