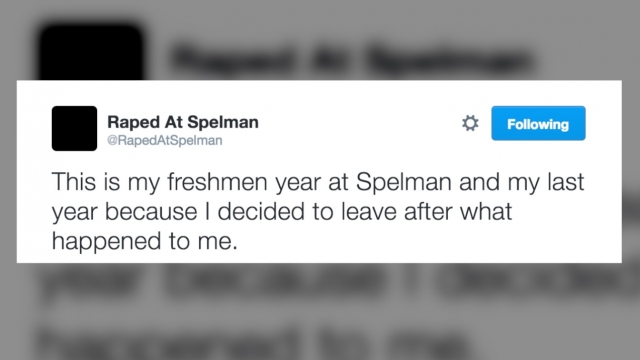 Morehouse College announced Thursday it's looking into rape allegations from a student at neighboring Spelman College after the student alleged in a tweet that Morehouse students sexually assaulted her.

Morehouse President John Wilson said in a statement the school's Office of Campus Safety and Title IX office were investigating but were operating on "limited information."

The anonymous student detailed the alleged incident in a series of tweets from the account @RapedAtSpelman. The first tweet from the account was shared nearly 3,000 times. The student alleges a Spelman administrator discouraged her from reporting her rape because of the Morehouse-Spelman dynamic.

This news comes as schools, and even the White House, attempt to address sexual assaults on college campuses through initiatives like "It's on Us."

"I said, 'If we could do anything to change the circumstances on campus, what would it be?' ... You know what the No. 1 thing was? Get more men involved," Vice President Joe Biden told Mic.

According to a new report from the National Center for Education Statistics, reports of forcible sex crimes on college campuses more than doubled from 2001 through 2013.

What those numbers don't tell us is if there were more incidents of sexual assaults in that time or if it means more survivors are coming forward.

This video includes clips from Morehouse College, Spelman College, It's on Us and Mic.