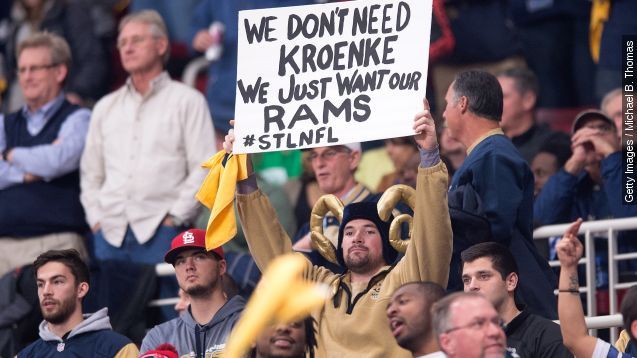 And in his application, he torched the city of St. Louis.

"St. Louis is not a three professional team market," he wrote.

"Compared to all other U.S. cities, St. Louis is struggling," he continued.

"No NFL club would be interested in the ... New St. Louis Stadium," Kroenke penned.

"Any NFL Club that signs on to this proposal in St. Louis will be well on the road to financial ruin," he wrote.

Now, Rams fans are firing back.

"It's amazing that I can't send a tweet from the Dome, but Stan Kroenke can send his relocation proposal all the way from hell." — @daniel_doelling

"For a guy who has yet to produce a winning season as majority owner, Kroenke is awfully confident in his product." — @msmallm2

"Reading between the lines on this one, but I think Stan Kroenke wants out of St. Louis." — @MattSebek

"Just go away, please, Stan Kroenke. To LA, fine. But preferably to the moon." — @JoanNiesen