Woman Launches Into Racist Rant Against Couple — Would You Intervene? 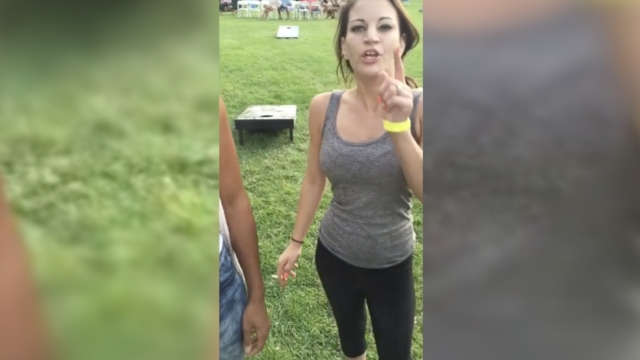 SMS
Woman Launches Into Racist Rant Against Couple — Would You Intervene?
By Cody LaGrow
By Cody LaGrow
August 24, 2016
Newsy's Cody LaGrow speaks with the people involved in a viral video that captured a racially charged incident in Chicago.
SHOW TRANSCRIPT

Ernest Crim said it was the most disgusting, despicable thing he's ever seen in his life. Referencing a viral video that captured blatant racism, Crim said his personal experience recording the incident documents what it feels like to be black in America today.

"If I were white, there would be no way possible I that would sit in company — any company — in my family and have somebody called a nigger," Maya Angelou said in a 1993 interview with Oprah.

It doesn't seem like everyone sees eye-to-eye with Angelou. In 2016, we've seen the N-word hurled at political rallies, within police departments and even on a pageant queen's Twitter profile.

Jessica Sanders also seemed to think it was OK. She used the slur at least 12 times in an interaction with Ernest Crim and his wife, Cassie Crim — high school teachers and parents of two daughters. The couple encountered Sanders at Chicago's Margarita Festival on July 30.

Newsy's Cody LaGrow spoke with the people involved in the viral video in individual interviews.

CODY LAGROW: "Did you do anything to provoke her?"

According to Crim, he and Cassie wanted to play a game of bean-bag toss. Cassie picked up bean bags they thought Jessica Sanders was done using, and that's what caused Sanders to approach them. The encounter now has more than 1 million combined views and captured what Crim said is the most blatant racism he's ever experienced.

SEE MORE: Beyond Ferguson: Where 'The Wheels Of Justice Turn Slow'

LAGROW: "How are you doing?"

LAGROW: "How does it feel when a white person calls you the N-word? Does it feel different?"

CRIM: "Yeah, because the N-word is a cultural thing, Cody. If I were to say it to a friend I grew up with, of course you say it extremely different. It's almost like a camaraderie. It's almost like they tried to put this on us as a negative thing, but we're going to flip it around because we're brothers, and this is how we roll. When a white person says it, of course it's different in each situation. But you feel as if somebody knows a secret about your past, and they're trying to humiliate you."

LAGROW: "So how does it feel that in the video she's standing next to two black people who know the power of that word, and they defended her?"

CRIM: "I wasn't even going to go after her, but they formed a wall to protect her. That did hurt. And to actually see the man in that video. He didn't even look me in the eye. I said repeatedly, 'You're just going to let her say that?' He couldn't look me in the eye as a man."

We were able to get a hold of Sanders' friend from the video, Evie McDowell. Since the incident, McDowell has ended her 13-year relationship with Sanders.

LAGROW: "Do you think Jessica Sanders could do anything to change the current status of your relationship?"

MCDOWELL: "She was like my best friend, so I don't know. And it's really hurtful that she just did it, and she doesn't have to apologize if she doesn't want to. I just can't have that in my life."

LAGROW: "If you saw Ernest today, what would you say to him?"

MCDOWELL: "I'm sorry it got that far. And that I'm sorry that you felt like you didn't matter. Because you do matter. Everyone matters. Just watching the video, I could tell how upset he was. And I just want to tell him and his wife that I'm sorry I didn't step in, but I didn't know what to do then."

LAGROW: "We kind of see you trying to defuse the situation the best way you knew how. Would you change how you tried to defuse that situation?"

MCDOWELL: "I would. I would change it. Doing nothing is just as bad as altercation."

Crim has taken his story to social media and said the positive support outweighs the hate mail.

LAGROW: "Does this experience change your view of people?"

CRIM: "What she did to me is not going to make me hate white people. It's just going to make me be that much more committed to equality and justice for my people and all people who deal with similar issues. The problem isn't the word. The problem is the system that protects white supremacists and racists and allows them to continue to do this without being punished at all."

Jessica Sanders was briefly detained and then removed from the festival. Crim doesn't think that's enough.

LAGROW: "If [Sanders] sincerely apologized, would you reconsider?"

LAGROW: "What do you think she deserves?"

CRIM: "I believe she deserves the maximum sentence for a felony hate crime."

In the state of Illinois, a felony hate crime could result in one to seven years in prison and/or a fine of up to $25,000 depending on the severity and location of the crime. But according to Chicago police, they're still investigating and no charges have been made.

LAGROW: "What do you recommend people do who hear the N-word used as a derogatory racial slur?"

Newsy submitted multiple requests to sit down and talk to Sanders, but she agreed only to answer questions via email. Sanders told us she is not a racist and that the N-word can be applied to any person of any race. She said one of the biggest misconceptions is that the Crims are innocent and that Ernest Crim called her "a cracker" after the video cuts out.

We asked him about that, and Crim admitted to calling her that minutes after he stopped recording Sanders' racist rant. He said his use of the word wasn't meant to be derogatory but as a reference to the word's origin, which stems from white slave owners cracking the whip on black slaves' backs.

Sanders had no message for Ernest Crim but said if she could do it over again, she would have let the Crims use the bean bag and walked away.