We Spent $6.9 Billion On This Election 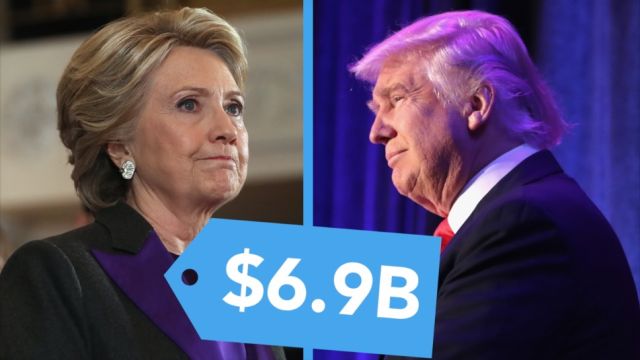 SMS
We Spent $6.9 Billion On This Election
By Matt Picht
By Matt Picht
November 9, 2016
Over $2.6 billion went to the presidential race alone, according to the Center for Responsive Politics.
SHOW TRANSCRIPT

It comes out to about $6.9 billion. That's the projected spending on the latest round of federal elections.

That's according to the Center for Responsive Politics, which added up all of the campaign spending reported to the Federal Election Commission.

The group's estimate includes spending by political parties, presidential and congressional campaigns, and outside groups like super PACs.

About $2.6 billion of that money was poured into the presidential race. That's actually slightly less than the inflation-adjusted total from the last presidential election.

Donald Trump's shoestring campaign budget might have had something to do with that. The president-elect's campaign committee spent about half of what Hillary Clinton's campaign did through mid-October.

Congressional races, on the other hand, keep getting more expensive. Spending on U.S. Senate and House campaigns hit more than $4.2 billion this cycle, up from around $3.9 billion in 2014.