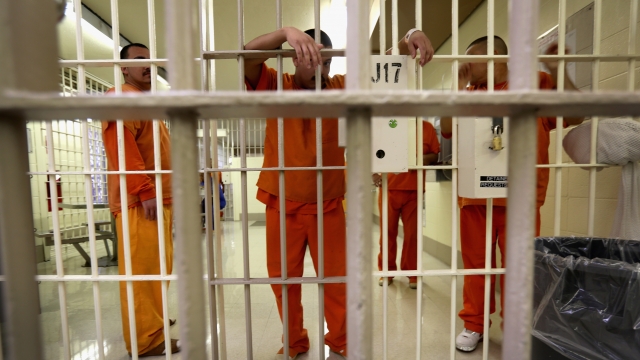 SMS
The US Could See One Of The Largest Prison Strikes In National History
By Lindsey Pulse
By Lindsey Pulse
September 9, 2016
Prisoners released a call-to-action letter aimed at ending what they call a modern form of slavery in federal prisons.
SHOW TRANSCRIPT

Prisons around the U.S. might see one of the largest inmate strikes ever in the nation's history.

Prisoners in correctional facilities across the country released a call-to-action letter, which they say aims to "end slavery in America."

SEE MORE: These Are 3 Of The Most Influential Labor Strikes In US History

What those prisoners are referring to is the forced labor required in many U.S. detention centers. The letter argues prisoners often receive little to no pay and can be punished for noncompliance.

It reads, in part, "They may have replaced the whip with pepper spray, but many of the other torments remain: isolation, restraint positions, stripping off our clothes and investigating our bodies as though we are animals."

Prisoners don't have the same labor rights as other American citizens. They aren't protected by labor laws, and salaries are well below the minimum wage. In some states, prisoners aren't compensated.

The prisoners say they aren't making requests to their "captors" but are appealing to other inmates in the federal prison system.

The letter states, "To every prisoner in every state and federal institution across this land, we call on you to stop being a slave."

This call to action comes on the 45th anniversary of the prison strike in Attica, New York. Prisoners there started an uprising and demanded more rights and better living conditions.

Correctional facilities have reportedly seen more and more resistance from prisoners in recent years. In 2013, inmates across California participated in a hunger strike to protest solitary confinement.

The strike is expected to take place in prisons in over 20 states. The letter closes with the line: "Step up, stand up, and join us. Against prison slavery. For liberation of all."