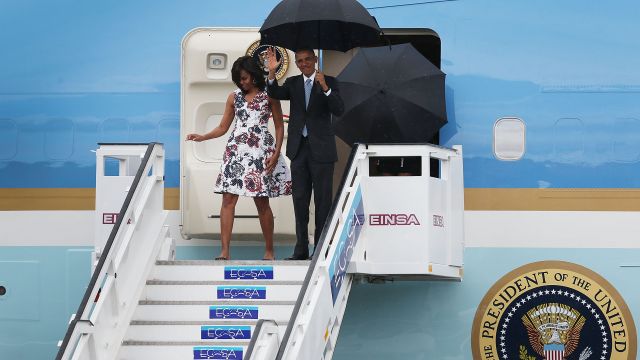 It's official. President Obama has landed in Cuba.

The historic trip began Sunday afternoon when the president and his family left Joint Base Andrews, Maryland.

When President Obama stepped on to Cuban soil, he became the first sitting president to visit the country in nearly 90 years.

Upon his arrival, Obama tweeted, "¿Que bolá Cuba? Just touched down here, looking forward to meeting and hearing directly from the Cuban people."

The changes between the U.S. and Cuba officially started in December 2014, when President Obama announced the two countries would begin restoring diplomatic relations. But Obama started talking about restoring relations with Cuba back in 2008, when he was a senator.

Since then, the U.S. has reopened its embassy in Havana, and agreements have been signed to resume commercial flights between the two nations.

During the two-day visit, the president is scheduled to meet with Cuban President Raúl Castro and leaders of Cuba's civil society. But the trip isn't all meetings. The Obamas will also take a walking tour of Old Havana and attend a baseball game.

This video includes images from Getty Images and vcheregati / CC BY SA 2.0.