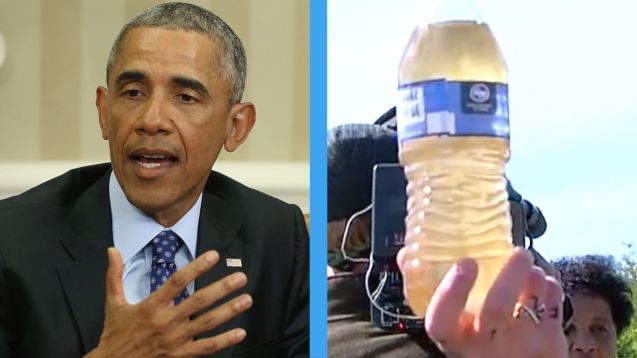 President Obama has officially declared a state of emergency in Michigan because of water contamination in the city of Flint. This allows the Federal Emergency Management Agency to provide emergency assistance to the area for 90 days.

This comes just two days after Michigan governor Rick Snyder requested help dealing with the fallout of a water crisis that seems to keep getting worse. (Video via WXYZ)

It started almost two years ago when Flint switched its water supply from Lake Huron to the Flint River in an effort to save money. Almost immediately, residents began to point out strange taste, smell and color of the water. (Video via CBS,WXYZ)

Both city and state officials were insistent the water was safe. The city's former mayor even drank some water from the tap to make the point. (Video via WXYZ)

But officials failed to account for the Flint River's saltiness; the water is 19 times more corrosive than Lake Huron. The city has already switched back to Lake Huron water, but the Flint River water had already corroded the lead-lined pipes, causing lead to contaminate the water. (Video via WXYZ)

Doctors caution high levels of lead can impact development in kids, even leading to decreased IQs.

"Lead is something that needs to be prevented and never ever reach the body of a child because when it does it is irreversible and there is no treatment," Dr. Mona Hanna-Attisha told WXYZ.

As the investigation into who knew what and when they knew it intensifies, many people are calling for the resignation of Gov. Snyder. He's apologized for what happened but that hasn't stopped protests. (Video via CNN)

The current mayor of Flint has said cleaning up the mess and providing health treatment to those affected could cost up to $1.5 billion. (Video via WXYZ)

This video includes images from Getty Images and WNEM.