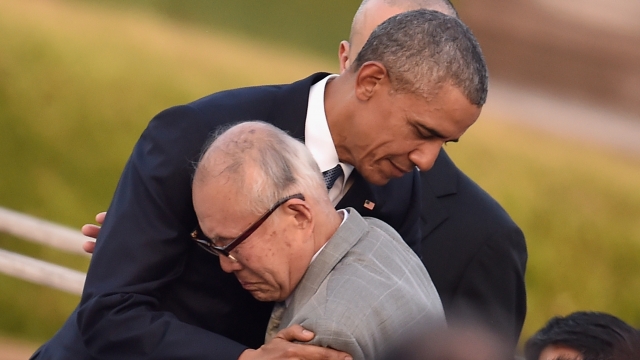 SMS
President Obama Calls For A World Without Nuclear Weapons At Hiroshima
By Melissa Prax
By Melissa Prax
May 27, 2016
During his trip to Japan, President Barack Obama didn't apologize for the World War II bombing, but he did recognize it.
SHOW TRANSCRIPT

"A flash of light and a wall of fire destroyed a city and demonstrated that mankind possessed the means to destroy itself," Obama said.

His trip comes more than 70 years after the U.S. dropped the atomic bomb on the city, killing 140,000 people.

Some in the U.S. have criticized the trip as an "apology tour." But the president and several administration officials said he wouldn't apologize for the bombing.

And he didn't. But he did recognize the tragedy.

"We have a shared responsibility to look directly into the eye of history and ask what we must do differently to curb such suffering again," Obama said.

Before the speech, he also wrote in the Hiroshima museum's guest book, "Let us now find the courage, together, to spread peace, and pursue a world without nuclear weapons."

It's that stance that helped Obama win the Nobel Peace Prize in 2009.

"Even as we make difficult decisions about going to war, we must also think clearly about how we fight it," Obama said in his Nobel lecture.

This video includes clips from Nobel Prize and The White House and images from Getty Images, U.S. Government and The U.S. National Archives and Records Administration.