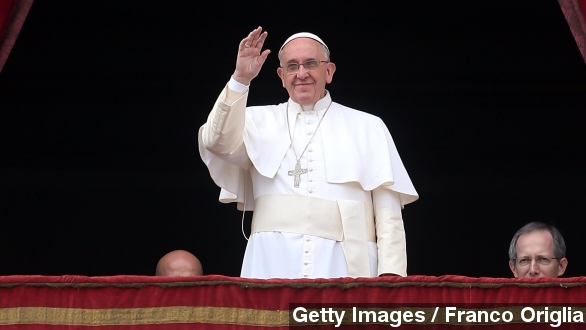 Pope Francis took part of his second ever Christmas address to talk about the victims of religious violence in some of the world's worst conflict regions.

The pope said, "I ask him, the savior of the world to look upon our brothers and sisters in Iraq and Syria, who for too long now have suffered the effects of ongoing conflict..."

In doing so, the pope demonstrated his characteristic attention to current events, also mentioning the conflict in Nigeria, where terrorist group Boko Haram has looked to implement its interpretation of Islam through killings and hostage-taking. (Video via CNN, Boko Haram)

On Christmas Eve, the pope even reportedly called refugees in Northern Iraq, displaced by the rise of ISIS, and told them to persevere and uphold the legacy of Christians in Iraq. (Video via UNICEF)

Still, despite the dark subject matter, the pope said he wished Christmas could bring them hope for the future.

As The Boston Globe's Crux points out, the pope's Christmas Eve kept in his theme of putting his own spin on tradition, with the pope choosing to use secular music — Mozart — and carrying a figure of the infant Jesus from the altar in St. Peter's Basilica to a nativity scene himself.

The pope also asked God to help bring peace to Ukraine, as well as South Sudan, Libya and the Central African Republic.