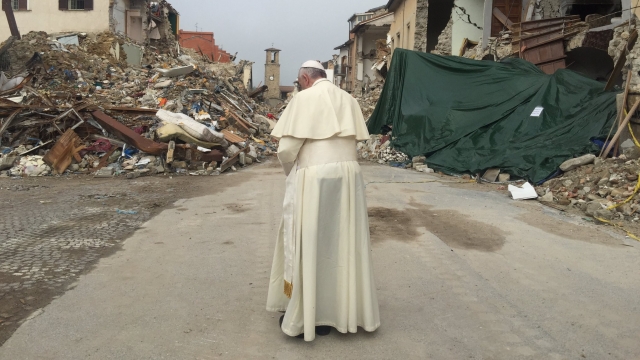 SMS
Pope Francis Paid A Surprise Visit To Earthquake Survivors In Italy
By Briana Koeneman
By Briana Koeneman
October 4, 2016
The Vatican didn't announce the pope's visit before he arrived in Amatrice because he wanted to keep the trip private.
SHOW TRANSCRIPT

Pope Francis paid a surprise visit to one of the central Italian towns destroyed by a devastating earthquake in August.

The Vatican first announced the pope's visit to Amatrice soon after he arrived because he wanted to keep the trip private.

Vatican Radio quotes him as telling the town's residents, "I thought long and hard in the first days of these many pains that my visit, perhaps, would be more of a hindrance than a help. ... I didn't want to be a bother."

Photos released by the Vatican show the pope comforting survivors, speaking with first responders and praying silently among the rubble.

Pope Francis' surprise trip comes just two days after he told journalists on a flight back to Rome that he wanted to see Italy's survivors "as a priest, as a bishop, as the pope. But alone."

After spending time in Amatrice, he visited two other towns hit hard by the quake. Nearly 300 people were killed in the disaster.