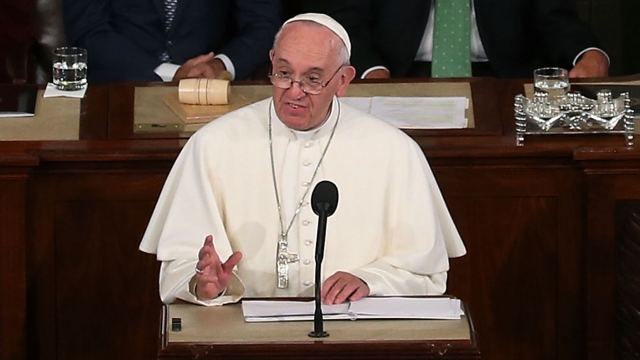 SMS
Pope Francis Calls On World Leaders To Abolish The Death Penalty
By Melissa Prax
By Melissa Prax
February 21, 2016
On Sunday, Pope Francis reiterated his view on the death penalty and called for better standards at correctional facilities.
SHOW TRANSCRIPT

Pope Francis wants to get rid of the death penalty internationally and encouraged governments to follow on Sunday.

"All Christians and people of good will are called today to work ... for the abolition of the death penalty," Pope Francis said.

In addition to this call, the pope said he wants correctional facilities to have better standards for conditions and the treatment of prisoners.

These sentiments of the Catholic Church are nothing new.

When the pope spoke to the U.S. Congress in September he also urged legislators to consider an abolishment.

"I am convinced that this way is the best, since every life is sacred, every human person is endowed with an inalienable dignity, and society can only benefit from the rehabilitation of those convicted of crimes," Pope Francis said.

This video includes clips from the Vatican, USA Today and images from Getty Images.