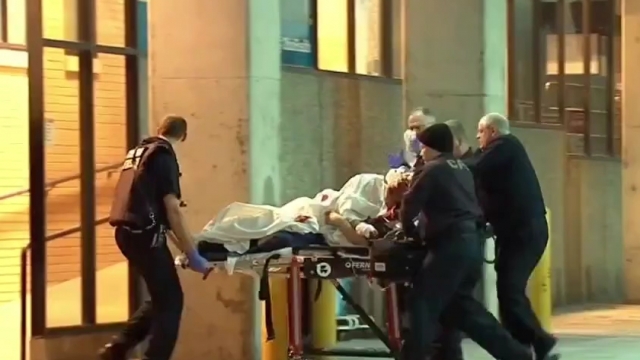 SMS
Police Kill Suspect After Machete Attack At Ohio Restaurant
By Briana Koeneman
By Briana Koeneman
February 12, 2016
According to authorities, a man walked into the Nazareth Mediterranean restaurant and deli in Columbus, Ohio, and started attacking people inside.
SHOW TRANSCRIPT

A man armed with a machete attacked multiple people in an Ohio restaurant Thursday night before police shot and killed him.

According to authorities, the suspect walked into the Nazareth Mediterranean restaurant and deli in Columbus around 6:30 p.m. and started slashing people inside. Police say none of the occupants recognized him.

"Immediately began swinging a machete at customers and employees inside. There was no rhyme or reason as to who he was going after as soon as he walked in, according to some of the witnesses," Sgt. Rich Weiner with the Columbus Police Department told WCMH.

The Columbus Dispatch reports the man then fled the restaurant and led police on a short car chase. He was shot by officers after he exited the vehicle wielding both the machete and a knife.

At least four people were injured in the attack and transported to a nearby hospital. Police say they have tentatively identified the suspect but have not revealed any further details about him.