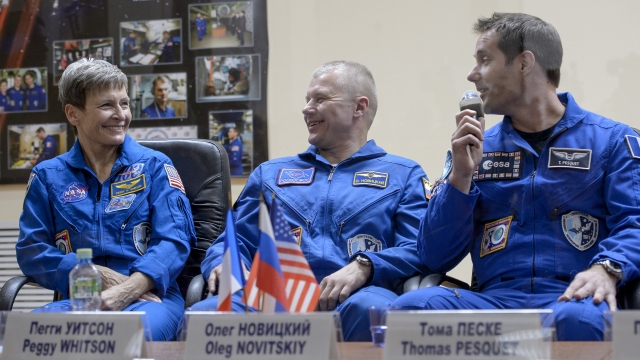 SMS
56-Year-Old Astronaut Becomes Oldest Woman In Space
By Ryan Biek
By Ryan Biek
November 20, 2016
Peggy Whitson is on her third mission in space and is no stranger to records.
SHOW TRANSCRIPT

Peggy Whitson is now the oldest woman to orbit Earth.

The 56-year-old NASA astronaut arrived at the International Space Station on Saturday.

That just beats the previous record-holder, Barbara Morgan, who was 55 when she went to space.

This is far from Whitson's first record, though. She's on her third mission in space, having already become the ISS' first female commander and the only woman to ever lead NASA's astronaut corps.

She even holds the record for most time in space among female astronauts –– which actually made getting cleared this time more difficult, since NASA limits how much radiation astronauts are exposed to.

By the end of her mission, Whitson should break another record: Most days spent in space by an American, regardless of gender.