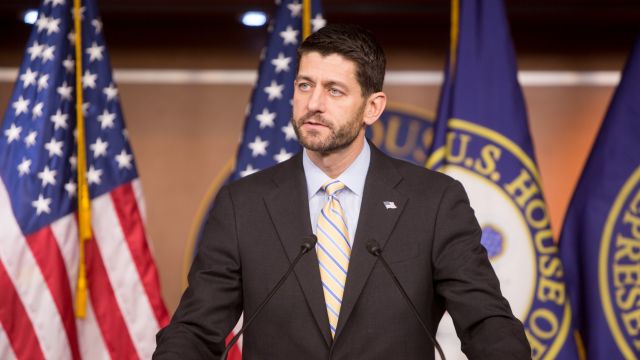 SMS
Paul Ryan Has An Alleged 'Secret Meeting' With 'GOP Money Men'
By Katie Link
By Katie Link
April 11, 2016
The Observer said the House speaker will meet next week with about 20 Republican donors.
SHOW TRANSCRIPT

House Speaker Paul Ryan has repeatedly denied any interest in running for president. But that surely hasn’t stopped the rumors from flying.

On Monday, the Observer reported Ryan will attend a "secret meeting" with "GOP money men" in New York City next week.

The outlet says the meeting, which will reportedly take place at the Mandarin Hotel, will involve about 20 Republican donors.

We should note, none of those donors nor Ryan himself could be reached for comment before the Observer published this story.

We should also note, a disclosure at the bottom of the article acknowledges that the publisher of Observer Media is Donald Trump's son-in-law.

Still, as the GOP candidates continue to vie for delegates and votes, other politicians have noted Ryan seems to be "running a parallel policy campaign."

Ryan recently sat down with Israel's prime minister and visited other Middle Eastern countries while his staff back at home released a 43-second video of Ryan's political efforts.

It's worth pointing out Ryan put a lot of effort into denying a nomination for his current job before ultimately taking over as House speaker. When asked about that in an interview with Politico, Ryan simply said, "It was a different situation."

This video includes clips from Office of the Speaker of the House and images from Getty Images.