Parliament Goes After 'Dodgy Dave' Over The Panama Papers 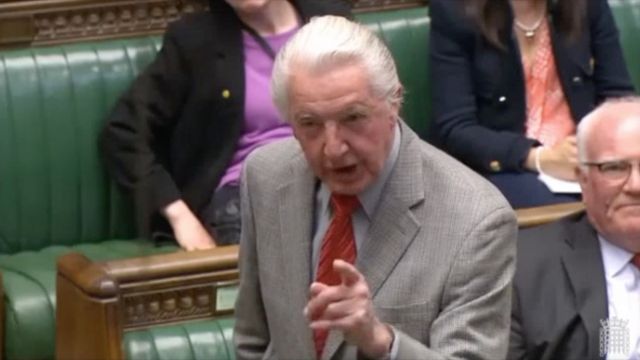 SMS
Parliament Goes After 'Dodgy Dave' Over The Panama Papers
By Matt Picht
By Matt Picht
April 12, 2016
A Labour MP was ejected from Parliament after refusing to back down after calling the prime minister "Dodgy Dave."
SHOW TRANSCRIPT

Right now, it doesn't seem like British Prime Minister David Cameron's links to the revelations in the Panama Papers will force him out of office or trigger a criminal investigation.

But they did earn him a drubbing in Parliament, courtesy of outspoken Labour MP Dennis Skinner.

"I didn't receive a proper answer then, maybe 'Dodgy Dave' will answer it now!" Skinner said.

"He's perfectly capable of asking his question without using that word. It's up to him, but if he doesn't wish to withdraw it, I can't reasonably ask the prime minister to answer the question," Bercow said.

Skinner refused, and was summarily ejected from Parliament for the day.

Cameron's allies have defended his connections to an offshore investment fund as both legally and morally acceptable. His opponents are now questioning the prime minister's commitment to tackling severe tax avoidance.

According to the BBC, this is the fifth time Skinner has been ejected from Parliament.