Parenting Style Can Have Effects All The Way Into Adulthood 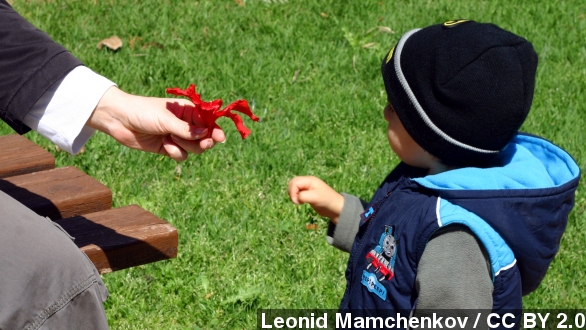 SMS
Parenting Style Can Have Effects All The Way Into Adulthood
By Steven Sparkman
By Steven Sparkman
December 29, 2014
A new study says "sensitive caregiving," or paying attention to a child's needs, predicts academic and social success up to at least age 32.
SHOW TRANSCRIPT

It's probably no surprise children's experiences in their first few years are important for how they develop later on. Socially, academically, you name it.

But it might be a surprise just how important those experiences really are and how long the effects last. A new study says the style of parenting a child receives in the first three years of life is linked to success nearly 30 years down the line.

The study comes from authors at the universities of Delaware, Minnesota and Illinois, and says what it calls "sensitive caregiving" plays a role decades later in a person's academic and career performance, as well as their romantic and social relationships.

If you're wondering what "sensitive caregiving" means, it's unfortunately kind of hard to nail down. It's not as simple as "spank or don't spank" or "TV or no TV."

Psych Central says it's defined as "the extent to which a parent responds to a child's signals appropriately and promptly, is positively involved during interactions with the child, and provides a secure base for the child's exploration of the environment."

Basically, it sounds like being an attentive and involved parent and treating children as individuals.

The researchers drew from an earlier study that looked at whether sensitive parenting had any lasting benefit as the child grew, up through age 15. No surprise here: The answer was yes.

The new study's authors wanted to take that concept further — all the way into adulthood.

Turns out there's a ready-made data set for that. The Minnesota Longitudinal Study tracked children from just before birth to age 32, collecting tons of data about development along the way.

As you can imagine, the findings have been a gold mine for child development research and gave the new study's authors the chance to see how parenting in those first three years can have practically lifelong effects.

Lee Raby, the main author, said in a press release, "Investments in early parent-child relationships may result in long-term returns that accumulate across individuals' lives," adding that "Success in relationships and academics represents the foundation for a healthy society."

The study's authors say they plan to take the research even further: seeing how a person's earliest experiences affect how they interact with their own children.