Panera Nixes 150 'No No' Ingredients, But It Could Be Costly 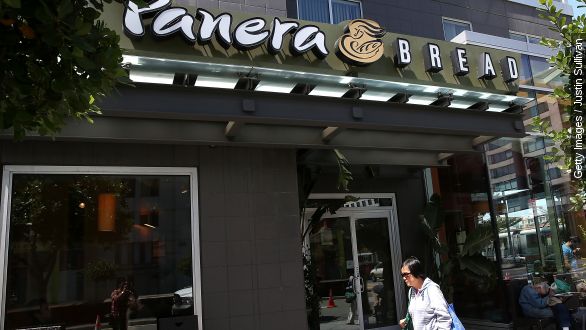 SMS
Panera Nixes 150 'No No' Ingredients, But It Could Be Costly
By Jamal Andress
By Jamal Andress
May 5, 2015
Panera's new "No No List" includes artificial preservatives, sweeteners and other items that the company says will be removed from its restaurants.
SHOW TRANSCRIPT

Not even a week ago, Chipotle announced it will only make burritos with nongenetically modified ingredients. Not to be out done, Chipotle's fast-casual competitor Panera has announced plans to drop 150 items from its list of ingredients.

Here's a line from a Panera Bread commercial: "We've realized the secret to great taste is clean food ultimately."

Panera has recently published its "No No List" online, which includes the artificial preservatives, sweeteners and flavors that Panera says will be taken off the menu by the end of 2016. Some have already been removed from Panera's food.

When asked about the drastic changes, Panera Bread Founder and CEO Ron Shaich told Fortune: "It is a much higher standard than what makes business sense. ... It is 'how do I want to feed my daughter?' That's the gold-standard question, and when I answer that, it tells me what I want to do for my customers."

Panera, much like Chipotle, has been ahead of the curve when it comes to removing items from its menu that are perceived as being unhealthy or better for the environment. More than a decade ago, Panera stopped using meat from animals that had taken antibiotics, and less than nine years ago, the company removed trans fat from its menus across the country.

This cleanse of the menu was once unique to places like Panera or Chipotle, but over the past year, many large corporations and restaurant chains  — McDonald's, Nestle, Tyson and Kraft, just to name a few — have all joined the trend to appeal to health-conscious consumers.

But making these major changes to the menu doesn't come without challenges. Panera's CEO says removing certain ingredients from its salad dressings was "the most challenging category by far," and it took the fast-casual company months to reformulate the dressing to fit its new standard.

"Rolling blackouts of carnitas sounds like an absolute nightmare!" a CNBC anchor said.

Chipotle has experienced firsthand the difficulties that can be created by sticking with a tougher standard. Chipotle was forced to cut its ties with one of its major pork suppliers because the supplier was not raising the livestock according to the restaurant's "responsibly raised" standards.

That forced the company to stop serving pork in many of its locations around the country, which had a negative effect on sales.

And while a healthier menu is undoubtedly a popular trend, it is also an expensive one. Panera's expenses rose to $479 million during the first quarter of 2015, which is 10 percent higher than a year ago.