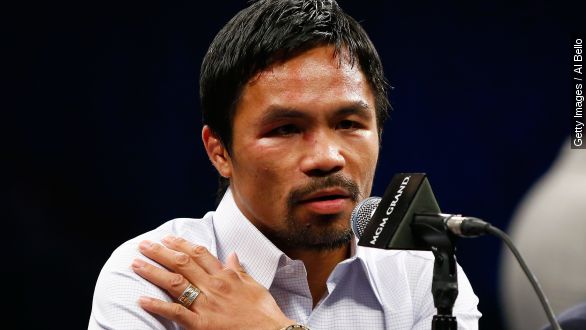 Saturday's fight against Floyd Mayweather Jr. was not the best of Manny Pacquiao's decorated career. Pacquiao lost to Mayweather in 12 rounds by a unanimous decision.

"Pacquiao faces reporters, his right arm in a sling and admits they considered postponing the fight after he injured himself in sparring three weeks before the bout," a reporter for Rappler says.

Shortly after the fight, Pacquiao told reporters he had a shoulder injury and requested an anti-inflammatory shot just before the fight, but was denied since he didn't disclose the injury prior to that night.

"Manny Pacquiao is at the doctor's office now in Los Angeles and will have surgery later this week for a 'significant tear' in his right rotator cuff. He'll be out nine months to a year," ESPN reports.

But his shoulder's health might not be his biggest concern.

In addition to possible fines or suspensions handed down from the Nevada Athletic Commission, there could be legal trouble headed his way too. Francisco Aguilar, chairman of the commission, told True.Ink, "It’s something we’re looking at, and an issue we’ll be discussing with the Attorney General."

The trouble over Pacquiao is this: Pacquiao's camp filled out medical cards saying nothing was wrong with his shoulder and didn't tell fight organizers until they arrived to MGM Grand that night. (Video via Showtime)

"The gate revenue for the fight is set to hit a staggering $72 million," Bloomberg reports.

And with it being one of the most lucrative fights in the history of boxing, it's easy to see why people might be upset over this.

Pacquiao has lobbied for a rematch since Saturday, but this shoulder injury coupled with Mayweather's desire to fight just once more and retire, complicates matters.

Still, Mayweather, 38, told ESPN's Stephen A. Smith Tuesday he's willing to rematch Pacquiao saying definitively, "I will fight him in a year after his surgery."