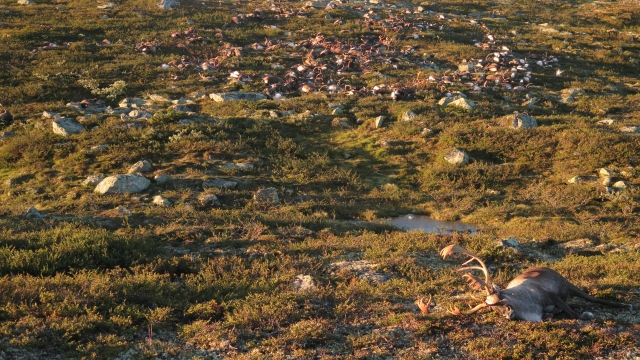 SMS
More Than 300 Reindeer Found Dead In Norway After A Lightning Storm
By Briana Koeneman
By Briana Koeneman
August 29, 2016
The Norwegian Environment Agency said in a press release at least 70 of the reindeer were calves, and five of the animals had to be euthanized.
SHOW TRANSCRIPT

The bodies of more than 300 wild reindeer were found scattered across a small area in central Norway.

And officials believe they were all killed in a single lightning storm.

A spokesman for the Norwegian Nature Inspectorate told local media he discovered the carcasses during a routine inspection of a remote hunting area last week.

He told The Local, "We've heard about animals being struck by lightning and killed, but I don't remember hearing about lightning killing animals on this scale before."

The Norwegian Environment Agency said in a press release at least 70 of the reindeer were calves, and five of the animals had to be euthanized.

Officials say they believe the death toll was so high because the reindeer may have huddled together out of fear during the storm, which isn't an uncommon thing for animals to do during bad weather.

Back in 2014, a single lightning bolt killed 45 head of cattle on a ranch in Montana after they tried to take cover under some trees.

And 21 head of cattle in South Dakota were found dead in May after a lightning bolt struck the metal feeder they had crowded around during a storm.

Norwegian Nature Inspectorate officials collected samples from the reindeers' bodies to determine exactly how they died. It's unclear if they were killed by a single lightning bolt or by multiple strikes.