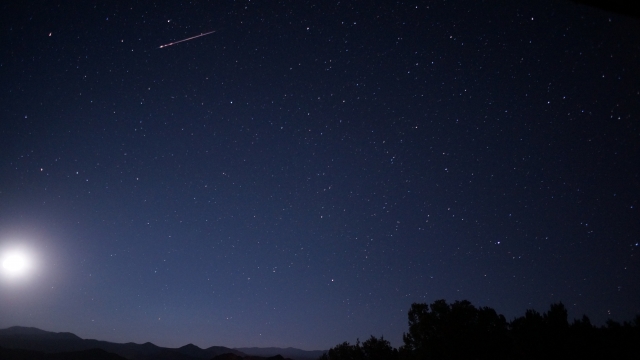 SMS
Our Summer Of Meteor Showers Begins Thursday Night
By Katherine Biek
By Katherine Biek
July 28, 2016
Astronomers aren't certain where the Delta Aquarid meteors come from, but they think they might originate from a comet discovered in 1986.
SHOW TRANSCRIPT

When it gets dark, make sure to go outside and look up.

You might see the annual Delta Aquarid meteor shower streaking across the sky Thursday and Friday.

It's visible from all over the world, but the meteors will appear to radiate from a central point within the Aquarius constellation.

The meteor shower is best seen with little moonlight because it's pretty faint.

Luckily, the crescent moon won't be too bright on Thursday night and will be less bright on Friday.

Astronomers don't know for sure where the Delta Aquarid meteors come from, but they think they might originate from a comet discovered in 1986.

A comet warms up when it gets close to the sun, creating a trail of gas and debris behind it, forming what looks like a tail. Meteor showers occur when Earth crosses paths with the stuff the comet leaves behind.

The meteors in the Delta Aquarid meteor shower streak along the sky at a medium speed, so EarthSky says it's possible to see some of them through early August.

That brings us to the largest meteor shower of the summer: the Perseids. This year, that shower will start to peak Aug. 11.

SEE MORE: With The Moon Out Of The Way, Perseids Put On A Great Show

Viewers searching for the Delta Aquarid shower Thursday should start looking at the southern part of the sky anytime between midnight and just before the sun rises.

This video includes images from Mike Lewinski / CC BY 2.0, Renato Pereira / CC BY 2.0 and Getty Images.