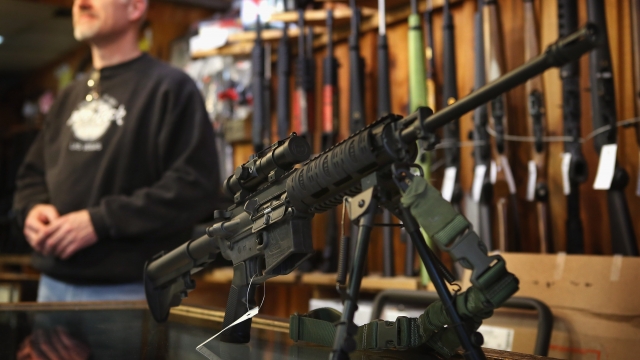 SMS
Orlando Gunman Is The Latest Mass Shooter To Use An AR-15
By Grant Suneson
By Grant Suneson
June 12, 2016
The mass shooting at a nightclub in Orlando, Florida, that killed 50 people was not the first to feature an AR-15 carbine.
SHOW TRANSCRIPT

The attack on an Orlando nightclub that killed 50 is officially the deadliest shooting in U.S. history. It's reignited the gun control debate, specifically focusing on the weapon that was used — an AR-15.

AR-15 carbines are a modified version of the military M16 assault rifle. One key difference is that AR-15s are semi-automatic, meaning only one bullet is fired with every pull of the trigger.

Although more people are killed by handguns each year, assault weapons are more dangerous in a mass shooting situation because their magazines hold more bullets.

Similar semi-automatic weapons were used in mass shootings in San Bernardino, California, and Aurora, Colorado, and at Sandy Hook Elementary School. They're one of the most popular guns in America, but they haven't been legal for very long.

A 10-year assault weapons ban expired in 2004, and guns in that category have remained largely unregulated since then. In Florida, you aren't required to have a license for your guns or even register them. The main restriction is a three-day waiting period for handguns.