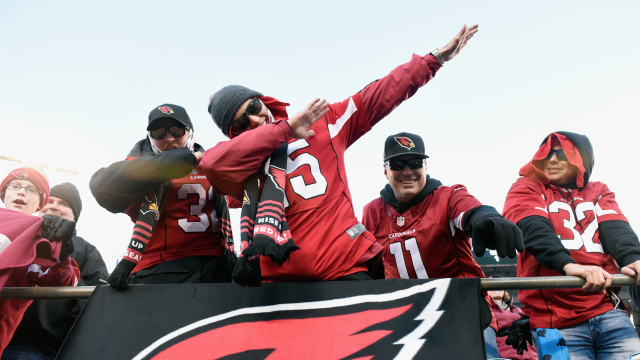 SMS
Only 2 Cardinals Fans Showed Up To Welcome Team Home After Loss
By Grant Suneson
By Grant Suneson
January 25, 2016
Only two fans showed up to welcome back the Arizona Cardinals after the team’s loss to the Carolina Panthers in the NFC championship game.
SHOW TRANSCRIPT

Before the Arizona Cardinals boarded their plane for Charlotte, North Carolina, Saturday, their fans were frenzied as the Cardinals' faithful bid their team farewell. The team thanked fans for coming out and assured them they would come home victorious. (Video via KNXV)

"We hope to see you guys here tomorrow night so we can celebrate," wide receiver Larry Fitzgerald said.

But things didn’t go as they expected. The Cardinals turned the ball over seven times, and Cam Newton and the Carolina Panthers crushed the Cardinals 49-15.

Fans were so demoralized only two of them showed up to welcome the players back to Arizona.

"They were grateful. They rolled down their windows and said thank you, waved, all of them waved, thumbs up. It was cool,” Ana Rojas said. (Video via KPNX)