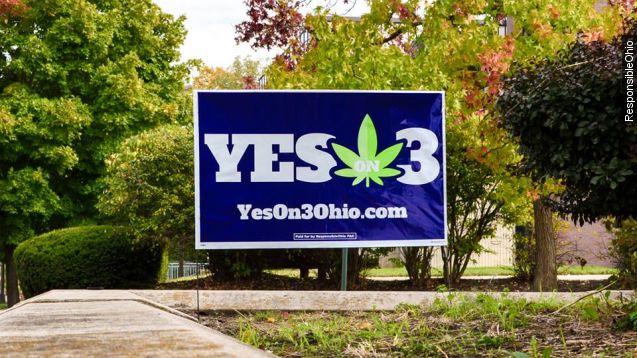 SMS
Ohio Voters Give Marijuana Initiative The Red Light
By Jake Godin
By Jake Godin
November 4, 2015
Ohioans voted down Issue 3, which would have legalized recreational marijuana. The catch? Ten locations would have been the primary farms.
SHOW TRANSCRIPT

The initiative, Issue 3, was soundly defeated, with 64 percent of the state voting against it.

The rejection was somewhat of a surprise after the initiative's advocates spent an estimated $7.1 million on ads, according to the Center for Public Integrity.

But there was one major sticking point — monopolies.

While Issue 3 would have certainly legalized marijuana, it would have also made it so the bulk of legal marijuana would only be produced at 10 farms in Ohio. (Video via WCPO)

As it turned out, those 10 farms were owned by investors dumping money into the pro-legalization campaign. (Video via WEWS)

"In short, Ohio voters said no to a marijuana monopoly in our constitution," said Curt Steiner with Ohioans Against Marijuana Monopolies.

Those wanting to legalize marijuana in Ohio are already gearing up for a new campaign in 2016 — this time, without the controversial monopoly bit. (Video via ResponsibleOhio)

This video includes an image from ResponsibleOhio.