Officials Investigating What Caused A NYC Crane To Collapse, Killing 1 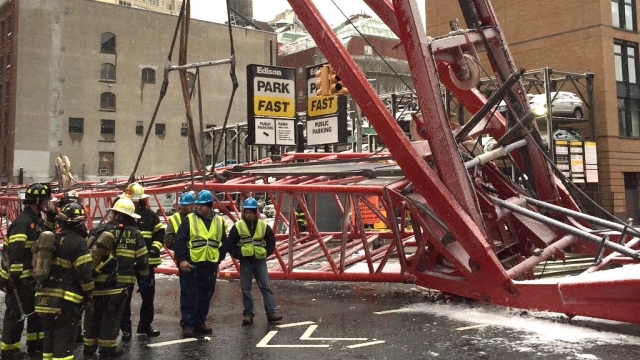 SMS
Officials Investigating What Caused A NYC Crane To Collapse, Killing 1
By Melissa Prax
By Melissa Prax
February 5, 2016
A crane collapsed in New York City, and officials are trying to find the cause.
SHOW TRANSCRIPT

The cause of a crane collapse in Lower Manhattan that killed one person is still under investigation.

The mobile construction crane injured at least three others, including two people WABC reports had to be rescued from their cars and taken to the hospital. That count has been revised by officials from initial estimates that said 15 were injured.

The New York Times spoke to an electrician working on a nearby project who saw the crane go down and questioned why it wasn't taken down the previous night with strong winds and snow in the forecast.

"This morning, they did no work on the site. They were simply in the process of securing the crane," New York City Mayor Bill de Blasio said at a press conference.

The crane's capacity is 330 tons, and officials said in a press conference snow probably wasn't a cause. (Video via WCBS)