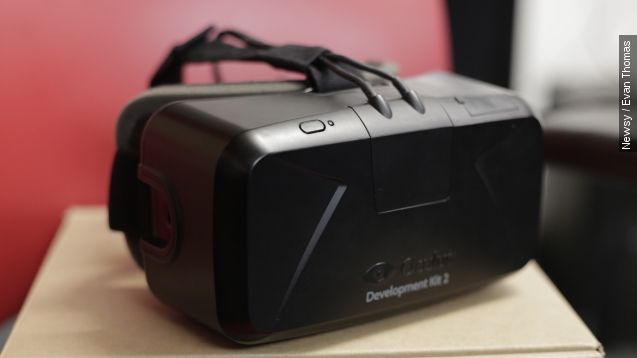 SMS
Oculus Rift Wins The VR Preorder Race
By Evan Thomas
By Evan Thomas
January 5, 2016
Preorders for the Oculus Rift virtual reality headset start Wednesday, but all the details will stay under wraps until then.
SHOW TRANSCRIPT

It still doesn't have a specific ship date beyond "Q1," but the Rift is the first of the big VR headsets to hit a preorder milestone. (Video via Oculus)

HTC's Vive will start preorders at the end of February, with a commercial release in April. Sony's PlayStation VR will ship sometime in 2016. (Video via HTC)

But it's still hard to say whether being the first to move will give Oculus an early lead, or whether it will just give the HTCs and Sonys of the industry more time to respond. Nobody's done successful commercial VR on a large scale yet. (Video via PlayStation)

We won't know what the Rift will cost until preorders go live. But you should expect something past $350. Oculus founder Palmer Luckey says the first consumer version of the company's headset doesn't pull any punches. (Video via Variety)

As he told Road to VR: "We need to put a stake in the ground and say: This is the best possible experience that we were able to make."

Oculus reps have said you'll be set if you can spare $1,500 total for the Rift and the computer to run it. It's likely to price a lot of people out of the market.

Not the original Kickstarter backers, though. On Tuesday, Oculus announced anyone who backed the first Developer Kit on Kickstarter will get a free special edition of the first consumer headset. (Video via Oculus)