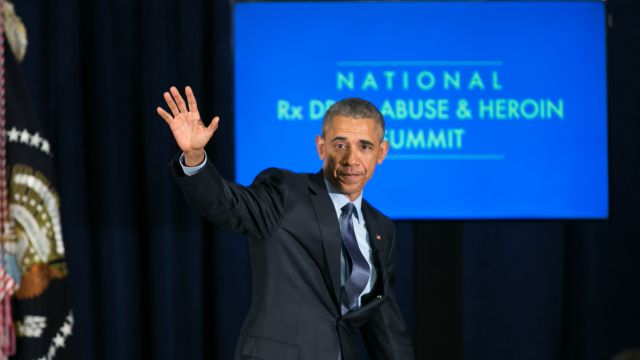 SMS
Obama Makes Fighting Drug Abuse A Top Priority For His Last Months
By Lindsay Gloor
By Lindsay Gloor
September 19, 2016
It's Prescription Opioid and Heroin Epidemic Awareness Week, according to the Obama administration. But why now?
SHOW TRANSCRIPT

The Obama Administration announced that this week is Prescription Opioid and Heroin Epidemic Awareness Week. It's an effort to educate the general public about the issue and urge Congress to provide more funding for treatment.

A White House memo stated the awareness week would include more than 250 events, including a roundtable discussion with families affected by heroin and opioid addictions.

This epidemic has received quite a bit of attention lately — but why did President Obama decide to dedicate a week to it?

His announcement cites a study from the Centers for Disease Control and Prevention that found that more Americans die in drug overdoses than traffic accidents each year.

Obama made a surprise visit to West Virginia last fall to announce his desire to fight prescription drug abuse, and he mentioned the cause in his 2016 State of the Union address.

It seems Obama wants to do as much as he can before his term ends.

Besides his recent focus on prescription opioids and heroin, Obama has continued granting clemency to prisoners, welcomed more than 10,000 Syrian refugees into the country and lowered the Guantanamo Bay detainee population to 61 men.