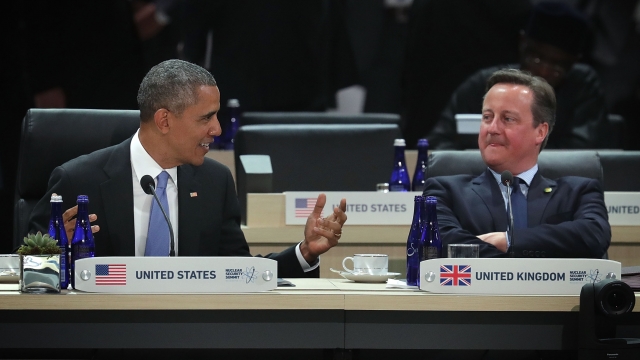 SMS
Obama Encourages British Citizens To Vote Against 'Brexit'
By Melissa Prax
By Melissa Prax
April 22, 2016
In an op-ed for The Telegraph, President Barack Obama asked voters to consider keeping Britain in the European Union in the upcoming referendum.
SHOW TRANSCRIPT

President Barack Obama is siding with Prime Minister David Cameron in advocating for Britain to stay in the European Union, but both leaders want voters to decide.

On June 23, British voters will decide whether or not to remain in the EU, an ongoing debate known as "Brexit."

And with that date looming, Cameron has a small handful of parliament members against him.

Shortly after Obama's op-ed was published, Cameron tweeted, "The US is one of our closest allies. So it's important to hear Barack Obama on why we should remain in the EU."

Obama arrived in London Thursday night for a three-day visit. But his visit wasn't solely inspired by the Brexit campaigns — he also wanted to wish the queen a happy birthday.

This video includes clips from The White House, U.K. Parliament, UKIP, BBC and an image from Getty Images.