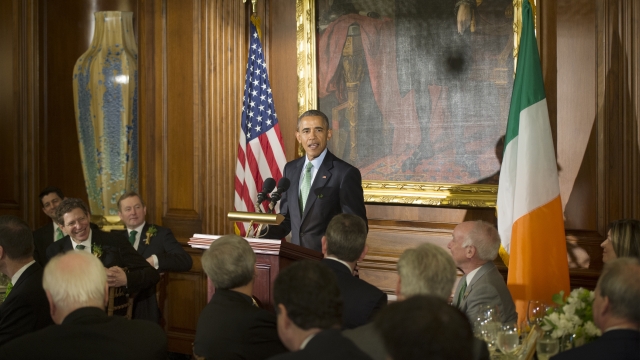 It's no secret this presidential campaign season has been long and messy, and apparently President Obama is fed up.

"We have heard vulgar and divisive rhetoric aimed at women and minorities — at Americans who don’t look like 'us,' or pray like 'us,' or vote like we do," Obama said.

During a speech at the "Friends of Ireland" luncheon at the U.S. Capitol, President Obama didn't mention any candidates by name nor did he point the finger directly at the Republican Party.

But it seems to be clear that one of the presidential candidates has been landing in hot water more than others.

"Donald Trump and his campaign, no stranger to controversy as it relates to the treatment of women," said an MSNBC anchor.

"Well, Donald Trump is at the center of new controversy," said ABC.

"And Republican front-runner Donald Trump is in the middle of an ugly new controversy," said a Fox News anchor.

The 2016 presidential campaign has been a hot topic for more than a year, and we still have nearly eight months before the general election. But as the field thins out and candidates start focusing on winning in November, maybe some of the controversy will die down, too.

As President Obama said Tuesday, "While some may be more to blame than others for the current climate, all of us are responsible for reversing it."

This video includes clips from ABC, MSNBC and Fox News and images from Getty Images.