Obama And Netanyahu's Tense Relationship In The Spotlight 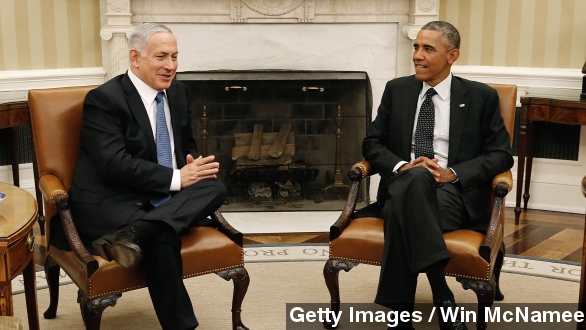 President Obama and Israeli Prime Minister Benjamin Netanyahu sat down at the White House Wednesday in their first face-to-face meeting in six months.

OBAMA VIA C-SPAN: " ... the unbreakable bond between the United States and Israel."

NETANYAHU VIA C-SPAN: " ... continuous bond of friendship that is so strong between Israel and the United States."

The media focus seemed to be on the less-than-warm relationship between the two leaders.

MARK MURRAY VIA MSNBC: "It's almost like the awkward dinner you often have from time to time with a family member that you [don't] necessarily see eye to eye with."

To be sure, the rift between Netanyahu and Obama has been well-documented.

Ahead of Wednesday's meeting, The Washington Post even drew up a list of their most awkward encounters.

And who can forget this open mic mishap?

BBC: "'I can't stand him anymore,' said Mr. Sarkozy of the Israeli Prime Minister Benjamin Netanyahu. He's a liar. In response, and with some exaggeration, Mr. Obama said, ‘You may be sick of him, but me, I have to deal with him every day.'"

Their already-strained relationship took another hit in 2012 when Netanyahu openly supported Mitt Romney for president. He and Obama haven't seen eye to eye on much since. (Video via Office of Prime Minister Benjamin Netanyahu)

Netanyahu has been sharply critical of U.S. nuclear talks with Iran.

And the Obama administration has been vocal in its calls for Israel to halt settlement construction in the West Bank.

More recently, the two men have been at odds over the bloodshed in Gaza. (Video via Israel Defense Forces)

Still, however tense their relationship might be, a writer at the Los Angeles Times argues the two men need each other. "Netanyahu knows that complete mismanagement of his ties with Washington can undermine his tenure. And from stabilizing Gaza to Kerry's quixotic quest for Israeli-Palestinian peace, Obama will need Netanyahu to get anything done."

During Wednesday's meeting, Obama and Netanyahu also discussed the deadline, now just two months away, for Iran and major world powers to reach a final nuclear agreement — an agreement Israel is highly skeptical of. Netanyahu recently equated Iran with Hamas and the Nazis.