The Nigerian President's Speech Sounded A Lot Like One Of Obama's 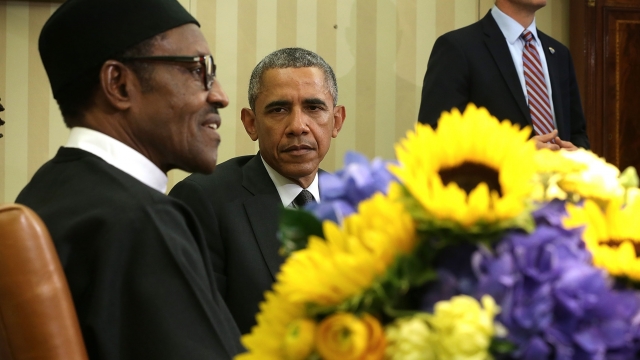 SMS
The Nigerian President's Speech Sounded A Lot Like One Of Obama's
By Samantha Crook
By Samantha Crook
September 17, 2016
In the same speech, President Muhammadu Buhari asked citizens to elevate the values of honesty and integrity in their own lives.
SHOW TRANSCRIPT

The President of Nigeria delivered some lines in a recent speech that sounded a lot like what President Barack Obama said in his 2008 victory speech. The plagiarism is pretty clear.

"We must resist the temptation to fall back on the same partisanship, pettiness and immaturity," President Muhammadu Buhari said.

"Let's resist the temptation to fall back on the same partisanship and pettiness and immaturity," Obama said in 2008.

"Let us summon a new spirit of responsibility, spirit of service, of patriotism and sacrifice," Buhari said.

"Let us all resolve to pitch in and work hard and look after not only ourselves, but one another," Buhari said.

"... where each of us resolves to pitch in and work harder and look after not only ourselves, but each other," Obama said.

Apparently, what both Obamas had to say back in 2008 was inspiring to copycats. A couple months ago, Melania Trump borrowed from Michelle Obama's 2008 Democratic National Convention speech.

The writer of Trump's speech apologized and said she tried to resign, but Donald Trump wouldn't accept it — which was a little more forgiving than Buhari's reaction.

According to a statement, Buhari ordered "disciplinary action" for those responsible for the plagiarized lines.

In his speech, Buhari addressed the country's history of government corruption and asked citizens to help by elevating the values of honesty and integrity in their own lives.