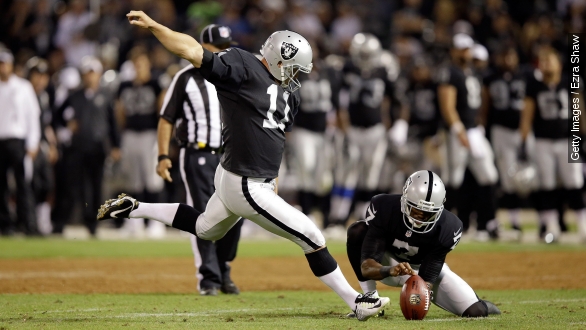 Ah, the extra point. Some see it as the traditional and appropriate curtain call for the touchdown and think it shouldn't be touched by the NFL.

"Why are we changing the sport?!" 'Boomer and Carton in the Morning' host Craig Carton said.

Others, a time to flip the channel because they know — with near absolute certainty — the ball will travel through those uprights everysingletime.

Some analysts even suggest ideas from other leagues to fix the system.

"Seven points for a touchdown and then you tried ... the action point," Keith Olbermann said.

But, love it or hate it, a change to the extra point layout is likely finally on the way — or so says NFL owners.

NFL.com writer Conor Orr rounded up the list of alternatives discussed. They include: a team's choice: kick the PAT from the 15-yard line or go for a 2-point conversion from the 1 1/2; eliminating the kick completely and just having a run or pass 2-point try; bringing the goal posts closer together; and, allowing the defense to score touchdowns on blocked kicks in addition to turnovers on 2-point conversions.

Of these options, ESPN's John Clayton says a longer extra point kick and shorter 2-point conversion "appears to be a certainty."

The idea has been tossed around for a while, and the benefits are pretty obvious: it would encourage teams to go for the 2-point conversion more often and make those PAT kicks a little less automatic.

NFL Commissioner Roger Goodell has been wanting to scoot the PAT kicks further back for years now, and the league even gave it a test run in preseason last year. (Video via ABC / 'LIVE with Kelly and Michael')

The NFL moved the line of scrimmage back to make it a 33-yard point after attempt. The result: eight missed extra points — more than the entire 2013 regular season but still only a fraction shaved off percentage-wise.

As for when we can expect a decision, The Washington Post cites one source familiar with the matter who says a final decision will come when the owners reconvene in May.

This video includes images from Getty images and music from Wake / CC BY 3.0.