Newspaper Says No To Clinton And Trump, Endorses Third-Party Candidate 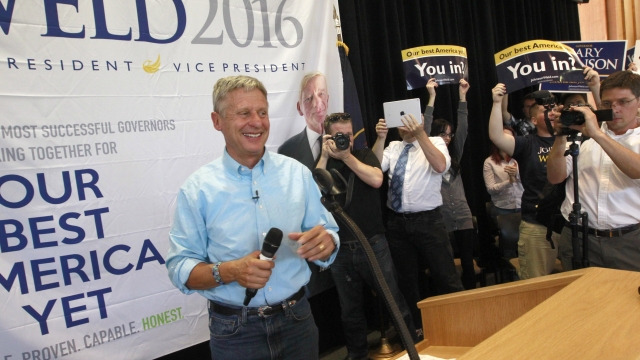 "Why not take this chance to reject the binary choice between Clinton and Trump that was created by our two-party system?"

The Richmond Times-Dispatch posed this question to its readers this weekend. In a sign of the times, the well-known Virginia newspaper has endorsed a third-party candidate — Libertarian Gary Johnson — for president.

Johnson apparently won the editorial board over when he met with it last week. The board wrote, "He's a man of good integrity, apparently normal ego and sound ideas. Sadly, in the 2016 presidential contest, those essential qualities make him an anomaly — though they are the foundations for solid leadership and trustworthy character."

But Johnson's temperament isn't the only reason the paper decided to endorse him. Johnson has experience building a company and running a state. He was the two-term Republican governor of New Mexico with a Democrat-led legislature.

The paper has endorsed Republican presidential candidates since 1980. Though Johnson is a third-party candidate, the endorsement may not be all that surprising.

He and Weld have also referred to themselves as "socially liberal," which doesn't necessarily appeal to more conservative voters but could be attractive to more liberal voters in the city.

Nevertheless, the paper said the duo's policy stances match up with its editorial creed.

It wrote, "We have over the years interviewed hundreds of politicians ... and there's no doubt that Johnson belongs in the major leagues ... He is a skilled and experienced leader, an able communicator, an intelligent man."

Richmond Times-Dispatch has also called on the Commission on Presidential Debates to allow Johnson to participate in the debates, saying that is the only way voters will be able to give him a fair shake.