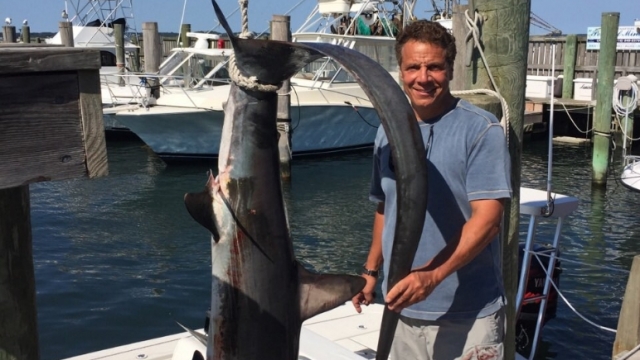 New York Governor Andrew Cuomo faced quite a bit of Twitter backlash after posing with the more than 150-pound thresher shark he caught off the coast of Long Island.

His brother, CNN anchor Chris Cuomo, posted a photo of the fishing group on Instagram.

Twitter users were upset with the Cuomo brothers, saying the two fished a threatened species and should be ashamed of their actions.

According to the International Union for the Conservation of Nature, all three species of thresher sharks are considered vulnerable because of their declining populations, but they're not listed under the Endangered Species Act.

To be listed as endangered species, the sharks would have to face a modification of their habitat, overuse due to commercial or educational reasons, an outbreak of disease or other factors affecting their survival.

The state of New York permits fishing for the common thresher shark — if the shark is at least 54 inches long. But catching the bigeye thresher is forbidden.

After reviewing the sharks' status several months ago, the National Oceanic and Atmospheric Administration determined threshers were not at risk of extinction.

But that didn't seem to curb public opinion. In response to the controversy, a representative for Governor Cuomo told the New York Post, "This is an edible game fish that is indigenous to New York waters, and catching them is allowable under both state and federal regulations.”

In 2013, Governor Cuomo was heralded for his decision to ban the possession and sale of shark fins — a popular delicacy in New York's Chinatown.