A New Video May Confirm Trump's Relationship With Mob Figure 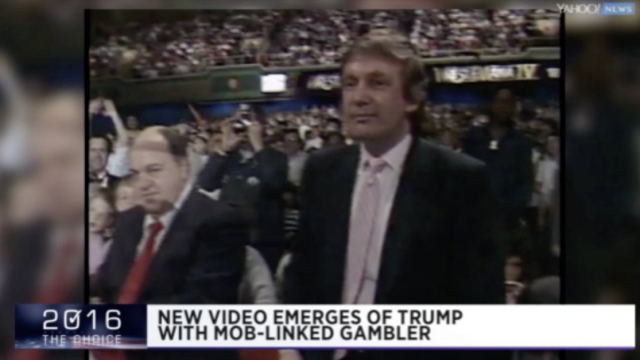 Footage from a professional wrestling event in 1988 shows Trump sitting next to LiButti.

Trump's campaign waived it away and explained to Yahoo News the businessman sat next to many people in his life.

But LiButti's daughter claims she and her father were actually Trump's guests at that wrestling event.

Connections between Trump and LiButti surfaced in March. In the past, Trump's casino was found guilty of breaking anti-discrimination laws while catering to the high-roller.

In the early 1990s, the Trump Plaza was fined a substantial sum for violating anti-discrimination laws while catering to LiButti. Investigations found the casino deliberately kept blacks and women away from LiButti while he gambled because he was such a high-roller and the casino didn't want to lose his business.

Trump wasn't tied to the scandal personally but said at the time he knew of Libutti but wouldn't have been able to match a face to the name.

LiButti's daughter has claimed Trump had a long relationship with her father that went beyond high-stakes gambling, with Trump bringing LiButti on his private helicopter and yacht. The Trump campaign insists no personal relationship existed.

Aside from LiButti, federal investigations in the past have found several of Trump's businesses likely benefited from mob connections –– possibly even racketeering.

Yahoo has noted Trump might not have been able to avoid doing business with the mob back then, given the control that organized crime has exerted over the New York construction industry in the past.