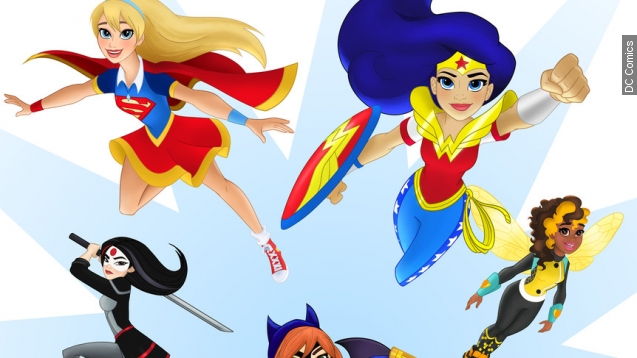 The first Super Hero Girls short from DC Comics is out and TV specials are just around the corner.

DC announced the initiative earlier this year with the hope the new super-girls would help young girls build confidence and character. (Video via Warner Bros.)

But there are lots of ideas about how to market superheroes to girls and what makes female superheroes and supervillians equitable to their male counterparts. (Video via Cartoon Network)

In 2012, DC had another girl-centric series, "Super Best Friends Forever."

If it reminds you of "The Powerpuff Girls," it might be because the producer of "Super Best Friends Forever" worked on the show.

One difference between "Super Best Friends Forever" and Super Hero Girls is the athletic build of the new characters. One Mattel executive told USA Today the builds for the forthcoming action figures are meant to "represent female empowerment."

But not everyone is on the same page about the best way to represent girls as superheroes.

When the news came out about DC's initiative, a writer for Forbes wrote: "Girls don’t need a whole new 'girl-powered' universe just for them, they just need to be included in the universe that already exists."

The Mattel action figures for the initiative will be their first marketed specifically for girls. And Lego will also be hopping on board. (Video via Mattel) (Video via Lego)