NASA's Space Probe Juno Finally Made It To Jupiter 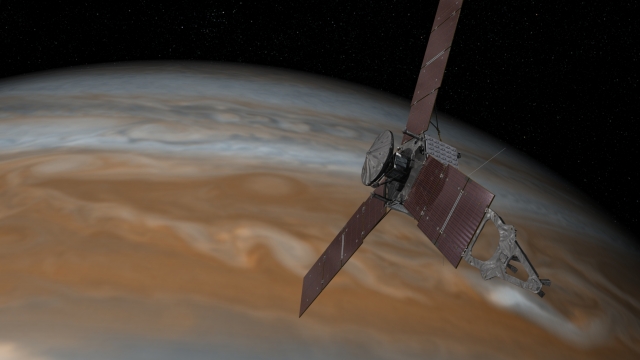 SMS
NASA's Space Probe Juno Finally Made It To Jupiter
By Ben Lawson
By Ben Lawson
July 5, 2016
Juno could give scientists their best look yet at the largest and oldest planet in our solar system.
SHOW TRANSCRIPT

NASA's Juno spacecraft has finally made it all the way to Jupiter.

The solar-powered craft took off from Earth in 2011 and is now orbiting Jupiter, the largest planet in our solar system.

Juno burned its engines for 35 minutes in order to slow down its velocity by more than 1,200 miles per hour in order to safely enter the planet's orbit. In total, it traveled about 1.7 billion miles before reaching destination.

Scientists believe Jupiter may be the first planet to form in our solar system, and it could hold clues about how the solar system changed over time.

Over the course of the mission, researchers will investigate whether the planet has a solid core, map its magnetic field and learn more about the mysterious red spot on Jupiter's surface.

Juno has already sent back some data for NASA scientists to digest. It captured the first images of Jupiter's moons in motion around the planet.

Since the planet is a gas giant, it gives off large waves of radiation that could degrade some of Juno's systems. If all goes as planned, the Juno mission will wrap up in February 2018.

This video includes clips from NASA and an image from Getty Images.