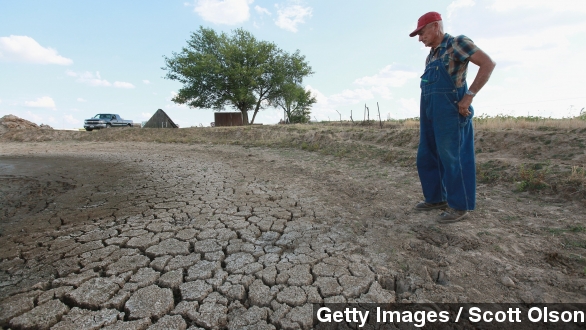 SMS
NASA Predicts 'Megadroughts' Due To Climate Change
By Kate Grumke
By Kate Grumke
February 14, 2015
A new NASA study found that in the next 75 years parts of the U.S. are likely to face droughts lasting more than 20 years.
SHOW TRANSCRIPT

A new NASA study found that parts of the U.S. are at risk for Megadroughts during the second half of this century because of climate change.

These droughts would hit the American southwest and great plains, and would be the worst the country has seen in the past 1,000 years.

Over the past four years, droughts in California and the southwest have cost the area billions of dollars in agricultural losses, fire damage and lost jobs.

NASA climate scientist Ben Cook says these naturally occurring droughts typically last 10 years at the most, which will be short compared to what this study predicts.

“Our projections of what we’re seeing is that with climate change many of these types of droughts will last 20, 30 sometimes even 40 years,” said Ben Cook, NASA climate scientist.

The study looked at tree rings from the past 1,000 years and other soil dryness measures. Scientists then used supercomputers to combine many different drought predictors to find what is most likely.

Kevin Anchukaitis, a climate scientist who was not involved in the study said, "It is rare to see all signs pointing so unwaveringly toward the same result, in this case a highly elevated risk of future megadroughts in the United States."

This video includes music from Kevin MacLeod / CC by 3.0.