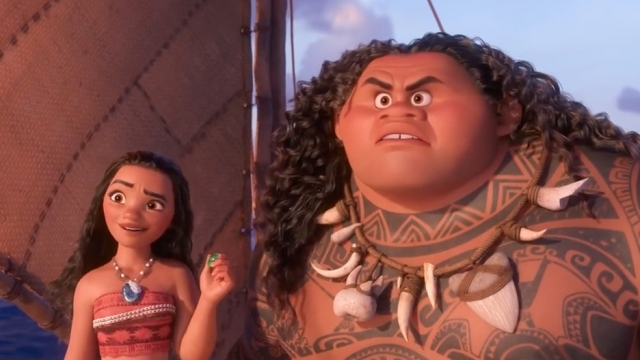 SMS
'Moana' Had One Of The Best Thanksgivings Ever At The Box Office
By Carter Woodiel
By Carter Woodiel
November 27, 2016
The film's holiday gross is the second-most ever behind a film we know you've heard of.
SHOW TRANSCRIPT

If you decided to work off your Thanksgiving food coma with a movie this past weekend, you weren't alone. This weekend was another big one at the box office led by a surprising animated flick.

Say "aloha" to "Moana." The new Disney film that took the top spot at the Thanksgiving weekend box office with a gross of over $55 million.

"Moana" took home over $81 million when you factor in its full Thanksgiving weekend release. That's the second-biggest gross ever over the long weekend behind a film you might've heard of: "Frozen."

"Fantastic Beasts and Where to Find Them" isn't on top of the box office totem pole anymore, but its creators are still *Rowling* in dough.

"Fantastic Beasts" took home just over $45 million this past weekend, bringing its two-week domestic gross to over $156 million.

Coming in at No. 3 is the box office marvel known as "Doctor Strange," which raked in $13.3 million in its fourth week on the big screen.

The Doctor's strong showing makes it the 10th movie in the Marvel Cinematic Universe to hit $200 million at the box office.

As for next week, Natalie Portman is Jackie O.